The kids. How do I begin to describe them? They are, of course, the main focus of both Children’s Villages of The Hands & Feet Project in Haiti. The statistics that are out there indicating the gap that exists between the life of an average child in Haiti and the life an average American child are absolutely staggering. I won’t get into them in this post, but, as I’ve said before, no matter what I write or say, you can’t really understand just how different life in Haiti is, compared to America, unless you go there. Having done so, now, I can speak with full confidence when I say that, thanks to The Hands & Feet Project, these kids are free to be kids. With their basic needs met the kids are free to enjoy many of the things that kids elsewhere do whether dancing to music, playing basketball, playing soccer, or just goofing around with friends.

The kids at Grand Goave, where I spent most of my week, are mostly upper elementary/early middle school-aged 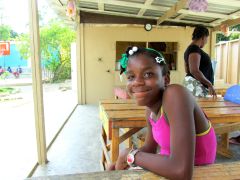 Kettia, one of the kids we sponsor through The Hands & Feet Project

kids and, like any group of kids, they represent a spectrum of personalities ranging from shy and quiet to bubbly and energetic with all types in between. There was one, however, that I was most interested in meeting. Her name is Kettia and my family has been sponsoring her through The Hands & Feet Project’s Family Room monthly sponsorship program for about one year. After site director Angie Sutton introduced us, Kettia went to her room and came back out with a family photo of my wife, my kids, and I that we’d sent her with a Christmas card several weeks ago. Over the course of the next couple of days we played basketball together, chased each other, and spent a good amount of time playing games and looking at photos on my phone. 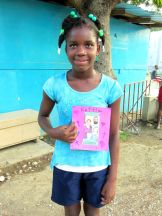 It was during the time that she spent looking at photos on my phone, listening as I explained who or what was in each one, that I made a personal commitment to not just be a long distance sponsor for Kettia. She was so interested in the photos of my family and I and my American experiences that I’d documented with images. I had hundreds of photos on there at the time and she went through every single one! We were there just looking at photos together for nearly an hour and I couldn’t help, but, wonder what thoughts were going through her head as she saw photos of my family of four, together, in our house and elsewhere. I want her to know, going forward, that though she won’t see me that often, she is now a part of our family and we will keep in touch with her throughout each year and for years to come. We will pray for her, specifically, as a family each evening and I will go back to visit with her again. In all, the time we spent together was a moving and bond-strengthening confirmation that the monthly sponsorship we’ve maintained through Hands & Feet has made a real, on-the-ground, impact and we, as a family, are so thankful for the opportunity to be involved. 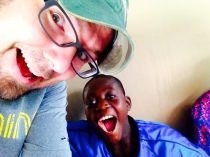 Odlin, one of the boys I battled against in our ocean water fight Sunday afternoon

Sunday was our first full day in Haiti and, to be honest, I was kind of nervous about how to interact with the kids, but, my concerns were eased during our Sunday afternoon trip to the beach when I was able to engage a couple of the boys in an all-out ocean water fight. That was when I realized that, unlike some in the normal Haitian population, most of the kids at Hands & Feet can speak both Hatian Creole and, to at least some extent, English. Considering this new tidbit of information together with the fact that water fights are fun for kids no matter what part of the world they grow up in, I was able to step into the water with confidence and, literally, get my feet wet with these kids for the first time! Splashing around with them was a blast and it remains one of my favorite memories from the trip.

Another favorite experience involved eating freshly-picked mangoes that were given to us by the kids. With a handful of large mango trees on site at the Grand Goave Children’s Village they are a common treat for the kids there who get them either by picking them off the ground after they’ve fallen or by throwing rocks and sticks up into the tree to knock them loose. They are absolutely delicious, but, they are also a mess to eat! 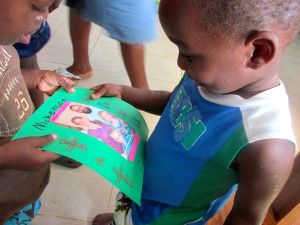 Nickenson, and one of his house brothers, looking at the photo/frame my son Jacob made for him

After working on projects around the Grand Goave Children’s Village on Monday, Tuesday, and Wednesday, we took a day trip to visit the Jacmel Children’s Village on Thursday. We packed into the van and saw some amazing views as we drove two hours over the mountains to Jacmel which is on the south coast of Haiti. The site in Jacmel, while continually expanding, is much more developed than the temporary housing that exists in Grand Goave. The population of kids in Jacmel is, on average, much younger than Grand Goave and I learned rather quickly that these younger kids were much more apt to just run to you, jump up, and cling on than their older counterparts in Grand Goave. What a joy it was to be able to hang out with those little bundles of energy! But, the two highlights of our Jacmel visit, undoubtedly, were visiting the other child that we sponsor through Hands & Feet, Nickenson, and, then, meeting the newest resident at the Hands & Feet Children’s Village in Jacmel, Elijah.

He was fascinated by my whiskers for some reason

Nickenson is a toddler who, as soon as walked through the door in his house, had a big smile on his face! He was very appreciative of the family photo/frame that my son Jacob made for him and it didn’t take long before he had both arms around my neck, holding on to me. One of the things he was most fascinated by, though, was my beard. He just kept playing with it while I chatted with him, trying to soak up his joyful wonder for a few minutes. When a teammate came in and informed me that it was time to leave and they were waiting on me, it broke my heart to have to do so. His house mother had to pull him off after he’d had his arms so tight around my neck and his head on my shoulder. My last view of him was as he was walking back to his bedroom with tears welling up, looking down at the photo I’d given him. My tears have welled up several times since then when reflecting back on that moment. 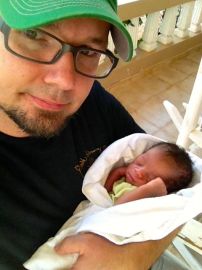 With 7-day old baby Elijah, the newest resident at the Jacmel Children’s Village

Before spending time with Nickenson, I had the chance to spend some time with Elijah, the newest resident at the Jacmel Hands & Feet Project Children’s Village. I rocked four-pound Elijah for almost a half-hour and what a privilege it was! He had just been abandoned by his mother who couldn’t or didn’t want to take care of him. She’d planned to leave him on the steps of the hospital – an all too common practice in Haiti, often with disheartening results – but, thankfully, The Hands & Feet Project was there to take him in.

These kids are real and they are beautiful. I know, they are hundreds of miles away from anyone that might read this blog, but, they are living and breathing children with personalities, dreams, and emotions. They’re made of God-given flesh and blood, just like your son or daughter, and just as deserving of love. Thank God, they get a good share of it from their house families and the staff of The Hands & Feet Project.

The following video features the children from The Hands & Feet Project

Little hands, shoeless feet, lonely eyes looking back at me
Will we leave behind the innocent to grieve
On their own, on the run when their lives have only begun
These could be our daughters and our sons
And just like a drum I can hear their hearts beating
I know my God won’t let them be defeated
Every child has a dream to belong and be loved

KINGS & QUEENS is a delicious first offering from the remixed line-up of Audio Adrenaline. At once it is a respectful nod to the legacy of Audio Adrenaline with light, pop ringers like “He Moves, You Move,” and “King Of The Comebacks,” but, also, a bold step forward breaking new ground for the band with songs such as “The Answer,” and “Seeker.” Both tracks are delivered skillfully by Dave Ghazarian (guitar), Jared Byers (drums), Jason Walker (keyboard) and original Audio Adrenaline member Will McGinniss, in an arrangement with a vibe that fits new lead singer Kevin Max like a tailored Italian suit. While the album as a whole is well done, “20:17 (Raise The Banner),” and “I Climb The Mountain,” passionately communicate hope and inspiration in a manner that is sure to resonate with many listeners. The lead single “Kings & Queens” is currently rising through the top ten on the Billboard Christian Songs chart and rightfully so. It raises a flag of hope and awareness for the orphaned and once abandoned children in Haiti that are now being served, fed, sheltered, and educated through the Hands & Feet Project, an organization founded by Mark Stuart and Will McGinniss in 2004. In fact, the entire Audio Adrenaline relaunch is an integral part of The Hands & Feet Project’s effort to raise the awareness and support necessary to expand so that they can care for more children in Haiti, the poorest nation in the western hemisphere, where the need for such care is so desperately critical. Put together cooperatively by original singer Mark Stuart, original bass player Will McGinniss, and the rest of the 2013 Audio Adrenaline line-up, this project delivers cleanly on a musical level and definitely has the potential to deliver on a humanitarian level for the orphans of Haiti through The Hands & Feet Project. Those two factors alone make this one of the most important albums to pay attention to in a long time. The legacy of Audio Adrenaline is alive, well, and moving forward.