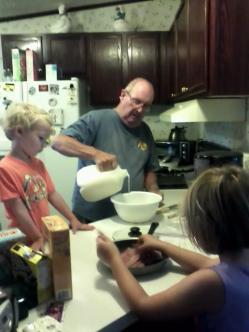 “Grandpa Rockwell’s Kitchen” is a tangible cornerstone to a God-ordained journey that I’ve been on since 2010 when my dad was diagnosed with brain cancer. My best friend and the best man in my wedding — my Dad — was somebody that I talked to every day on the phone since moving south from upstate NY to start my teaching career in 2000. It was 2007 when he finally moved down to spend more time with his granddaughter and to be ready to provide daily daycare to his grandson who was due to be born in October of that year.

For three years we enjoyed having my Dad close by and he enjoyed making many special memories with his grandkids. After a lifetime of working so hard, but, not necessarily having a lot to show for it, he was enjoying life!

But, in September 2010 life took a hard turn as he was diagnosed with carcinoid cancer. He immediately had surgery and, as his primary caretakers, my wife and I (and my Uncle John during many visits to come over the next 16 months) focused on slowing down in order to help dad through his recovery. Unfortunately, though, as he was supposed to be getting better, he started showing symptoms of a deeper problem. It wasn’t long after that the diagnosis of stage four glioblastoma brain cancer was made.

The next sixteen months were an emotional roller coaster that included many blessings and happy moments, but, more so, an ever-darkening decline as I witnessed him deteriorating from one day to the next. His final five months were the darkest and hardest times I’ve ever endured up to that point.

Dad worked multiple jobs at a time in the years leading up to retirement and, throughout his life, was always the first to love his neighbor as himself, even though he wasn’t a spiritual man at all. I could give you countless examples of the patterns I witnessed in him, growing up as his son, in which he exemplified a self-sacrificing attitude toward those around him. He continued to give right up until his diagnosis in 2010, routinely picking me up at 3:00 in the morning on Saturdays so that we could go prepare breakfast at Rowan Helping Ministries. But, despite his efforts throughout his life, struggles and setbacks were never far from reach. He’d been let down by a company he worked 25 years for, he endured an ugly divorce, lost everything in a house fire, and never seemed to receive much good to balance out all that he gave.

He’d just finally started to truly enjoy his new life in North Carolina as a grandpa, but, now it was being ripped away from him. He was breaking down.

I remember, distinctly, a conversation he and I had while I drove him home from our house one evening when in an extremely rare and candid moment, he said, “I just don’t understand why it has to be this way.”

This was a man who, for seventy years prior, was an ironclad fortress that never let on that anything bothered him. For him to reveal the hurt that he was feeling was heartbreaking. If you knew him, you would realize how out of character such a desperate question was for him.

By God’s grace, a conversation I had with him in October 2011 (in conjunction with other conversations I learned about later that he’d had with a couple other folks) opened my Dad up to accepting the eternal hope of Jesus. This fact, alone, gives me so much hope as I continue to grieve him in his absence. But, it was the first days, weeks, and months that the loss of my Dad hurt the most. I was buried in grief that I couldn’t have  even imagined before.

Amidst my grief I started to unpack lessons that Dad had still been teaching me even in his final weeks when he was most vulnerable. I made several missteps in the process, but, ultimately realized that if my Uncle John and I didn’t take on certain tasks for my dad that I’d never imagined doing before (helping him in the bathroom, the shower, medications, etc.), they wouldn’t get done. All of a sudden, I realized in a tangible way like never before that there are vulnerable people in this world who we were designed, by God, to serve in their times of need.

It was then that God made the monumental connection in my head and heart, for the first time in my life, to James 1:27: “Religion that God our Father accepts as pure and faultless is this: to look after orphans and widows in their distress and to keep oneself from being polluted by the world.”

Indeed, in serving the needs of most vulnerable people in the world, we can find God. (Matthew 25:40).

It was in the time leading up to, and in the wake of my Dad’s passing, that someone I’d only barely started developing a slight friendship with around the time of my Dad’s diagnosis, Kevin Max, stepped in and made turned my attention in a way that would change my life forever.

While I’d met Kevin before and shared a meal with him in the past, our acquaintance wasn’t built on much by that point. Knowing that I’d just lost my dad, however, he reached out to me privately and put me in contact with Mark Stuart, director of an organization that Kevin had just started supporting, the Hands & Feet Project. Hands & Feet, at that time, had one fully operational Children’s Village established in Jacmel, Haiti where they cared for orphaned and abandoned children and they had just started another in the Grand Goave area.

After learning more about the work and mission of the Hands & Feet Project, my wife, kids, and I prayerfully started tithing toward the Hands & Feet Project through child sponsorship. Doing so ignited a spark of hope and purpose that I held close in the midst of our grief and the process of working through all of the end-of-life billing and estate tasks that have to be worked through when one’s parent passes.

But, the mixture of grief and stress that comes with end-of-life responsibilities loved ones of the deceased deal with, in combination with the stress that comes from normal everyday life, continued to wear me down on a daily basis and one of the biggest burdens was trying to sell my Dad’s house. It was a modular home that he’d purchased at a good price because it had been foreclosed upon prior to his purchase. I initially thought, because of the prior foreclosure, we’d be able to sell it quickly and make a reasonable profit over the price he’d paid for it. But, after seven months on the market, we’d received only a few offers and they were all for only about 60% of what was still owed on the mortgage.

With every passing month’s mortgage payment being sent out without a reasonable offer coming in, my anxiety about the financial loss grew until, finally, I collapsed on my bed in a prayer of desperation asking God to relieve this debt, promising that, if He did, I would donate any profit to the Hands & Feet Project. I just wanted to debt to be lifted.

Within just a couple of weeks of that prayer, and after seven months of nothing but offers that fell well-short of the remaining mortgage, we accepted an offer that paid off the mortgage and still made a $2,500 profit! I was blown away and overwhelmed with gratitude!

Once the sale was finalized I followed through and sent an e-mail to Hands & Feet Project director Mark Stuart explaining the circumstances I’d been walking through and what God had done. I also included a blog post I’d written in honor of my Dad before he passed away. I didn’t ask for anything, but, just wanted to let him know about this amazing answer to prayer and where the money for the donation originated from. 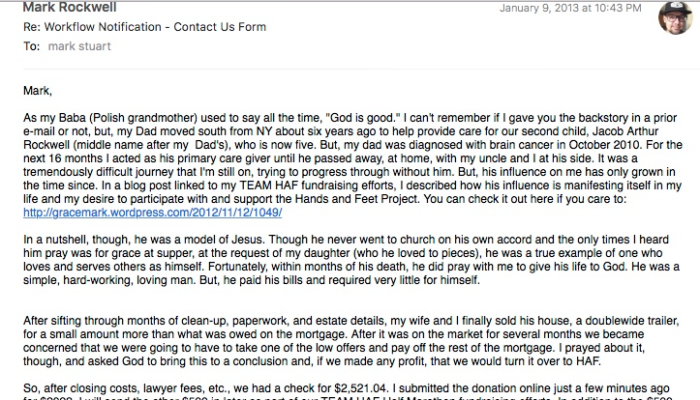 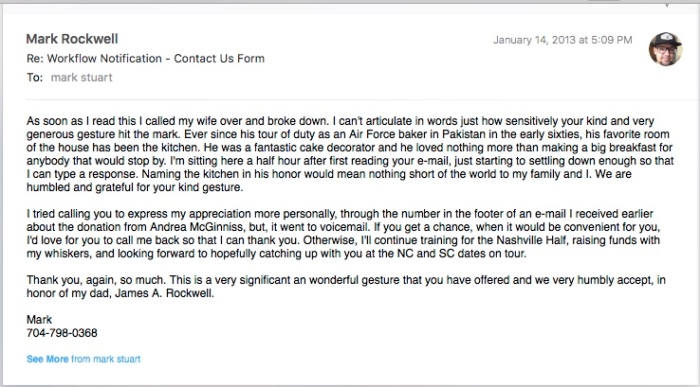 I’ve gone back through the e-mails, replayed the conversations Mark and I had over the phone, in my head, recounted the order and odds of each of the circumstances and nothing adds up outside of the grace of God. With Mark’s kind and generous gesture in honor of my Dad,  the heavy burden that I’d been struggling so desperately to carry for months, in an instant, lifted in a sweepingly dramatic and  victorious manner that can only be explained by the grace and mercy of God!

Where there once was hopelessness and despair, now stands gratitude, purpose, and joy! While God never left my side, I now have a bright and glowing reminder of His grace and faithfulness  standing front and center in my life! 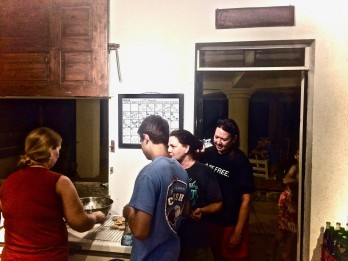 Since 2012 my family and I have been blessed with many opportunities to participate in activities, mission trips, and projects in support of the ongoing mission of The Hands & Feet Project, but, please understand, it is not out of any kind of self-sacrifice that we do so. After experiencing the manner in which God has changed our story, we find rich, pure, sincere joy in participating in the mission of The Hands & Feet Project to love “the least of these” (Matthew 25:40, James 1:27).

That said, we know the manner in which we’ve been blessed by God through Mark and the Hands & Feet Project is small in comparison to the rich flow of benefit that has been poured out on so many children and adults in Haiti.

I know I’m not the only one whose life has been or will be changed by the Hands & Feet Project. Thank God. 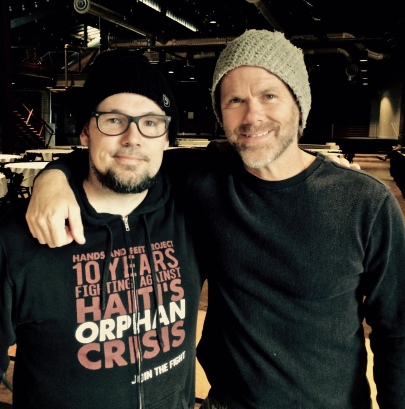 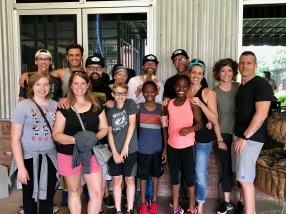 Our family with Ben Calhoun, the McGinniss Family, the Stuart family, and Ryan and Alicia Zornes

Learn more about The Hands & Feet Project’s mission to fight the orphan crisis in Haiti by keeping families together.